Leyhbert Millan Sharp has worked extensively as an artist, graphic and audiovisual designer, and film actor/director in Colombia. He holds two university degrees in Industrial Relations and Film & Television Production.
Influenced by artists Joan Miró and Wassily Kandinsky, Leyhbert is a postmodernist experimentation artist, who prefers breathing life into his works at night, finding that the evening creates the perfect mood for creating dynamic visual masterpieces with a variety of elements, color and techniques.
Leyhbert’s artistic creations 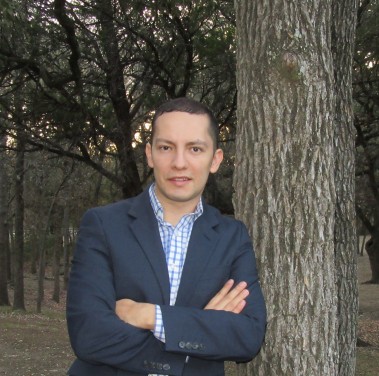 strongly reflect the influence of his deceased mother Herlinda. Originally he signed his artwork “Herlinda” but has since begun signing “Millan” instead–his mother’s last name. Much of Leyhbert’s artistic work focuses upon themes of emotion, feminine endurance, personal empowerment and maternal beauty. Several of his works have been exhibited internationally and by private organizations, and his original painting “Freedom” garnered Leyhbert a prestigious award in Bogota, Colombia.
Leyhbert was honored to have been chosen from among San Antonio’s artistic community to commission the official 2017 painting for the U.S. Military Veterans Parade Association. Additionally, he portrayed a supporting character in the movie Who am I? and Why me?, soon to be released in theaters throughout Texas.
Leyhbert has also worked extensively as a leading actor in a variety of venues in both Texas and Colombia, including theatre productions, independent short films, theme parks, and private shows. In 2006 one of Leyhbert’s film projects was featured at a national film festival in Havana, Cuba. he has taught acting and related classes in both Colombia and in the United States.
Also an experienced businessman, Leyhbert has managed various corporations and has worked as a technical director for different conventions, political events and business conferences in the United States, including working with some presidents at the United Nations in New York, NY.
He is available to create custom artwork upon request and is available for custom graphic design services.